This year H.E.L.P. celebrated its annual fundraiser with a Wild, Wild West theme, which brought out many fun costumes. Guests were greeted at the door with complimentary champagne and appetizers, and the opportunity to browse through the many wonderful silent auction baskets beautifully presented by Gala Chair, Nancy Scott, and her committee.

H.E.L.P. Board Chair, Dr. Tom Paulsen, M.D. welcomed guests in to dinner and introduced other Board members. Executive Director, Britt Huff, Ph.D., introduced the event sponsors, beginning with Grand Presenting Sponsor the Ralph Scriba Family Fund. Ralph Scriba is a former H.E.L.P. honoree and has received the Lifetime Achievement Award from H.E.L.P. for his longtime, generous support of H.E.L.P.’s vital programs and services for seniors. 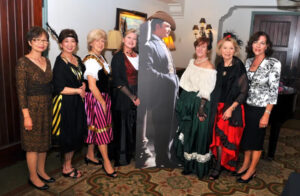 Honorees for the evening were Sherry Kramer, of Continental Development Corporation, and Steve Napolitano, City Councilman from Manhattan Beach. Sherry Kramer received the Vanguard Award, which is given to a person or organization that has been supportive of H.E.L.P.  and its work with seniors, and who has made a positive impact on their community through the support of charities and non-profits, and by encouraging volunteerism and donations. Sherry Kramer has been the Community Affairs Director for Continental Development Corporation, headquartered in El Segundo, since 2006.

Steve Napolitano received the H.E.L.P. Inspiration Award, which is given to a person who has set an example for the community through their community service, donations, and support. Steve has been a longtime public servant in the South Bay. He is presently serving on the Manhattan City Council as Mayor Pro Tem. He previously was elected to the City Council in 1992 at the age of 26, the youngest person ever elected to the Manhattan Beach City Council. He served as Mayor and Councilmember, and was overwhelmingly reelected in 1997 and 2001 before being termed out in 2005.  From 2005 to 2016 Steve represented LA County Supervisor Knabe in eight South Bay communities. Steve has been a longtime supporter of H.E.L.P. and for the last six years has served as the volunteer auctioneer for H.E.L.P.’s live auction at our annual fundraiser gala.

H.E.L.P. Vice Chair, Brad Baker, gallantly stepped up as auctioneer for the live charity auction, which featured wonderful donated vacation packages such as a Mammoth ski condo, Big Bear townhouse, an overnight staycation at the Terranea Resort, a week at Brad’s Maui condo, and a weekend at the InterContinental Hotel in San Francisco, donated by Richard and Melanie Lundquist. Lively bidding resulted in generous funds being raised in support of H.E.L.P. s programs and services for seniors. Thank you to all who attended and supported the H.E.L.P. gala.

*Scroll down for photos of the gala

H.E.L.P. thanks our wonderful sponsors and donors to this event.  They include:

We also thank all of the following individuals and businesses who donated wonderful gifts for our silent auction:

With a special thank you to our live auction and raffle donors:

H.E.L.P. Board member Jeff and Traci Hahn, right, with Rob and Patti Palmer.