H.E.L.P.’s annual Celebrate Summer fundraiser this year took place at the Palos Verdes Golf Club on May 5, so it was natural to be themed, “Cinco de Mayo Fiesta.”  Many attendees arrived in their favorite fiesta attire, ready to enjoy margaritas and champagne as they bid on exciting silent auction items during the pre-dinner reception.  Gala chair Nancy Scott, also a member of the H.E.L.P. Board of Directors, had arrived early with her committee to prepare the festive presentation of auction packages. 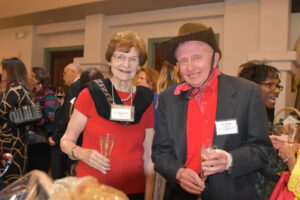 Each year H.E.L.P. honors several worthy local individuals for their contributions to the South Bay community.  This year our honorees were Debbie Richardson, Vice President of PV Premier Bank; and Kate Crane, Esq., a South Bay Estate Planning attorney.  Kate Crane received H.E.L.P.’s Legacy Award for her long time support of H.E.L.P., having served on the H.E.L.P. Board of Directors in the early years and continued that involvement over the years.  She was also recognized for her many other leadership and volunteer efforts in the community with other charitable organizations.  In addition to managing her local law firm, she also served on the Boards of LA BioMed at Harbor UCLA, the Blue Ribbon of the LA Music Center, and served on the Manhattan Beach Library Commission. For nine years she was a member of the Board of Trustees of Torrance Memorial Medical Center, and served as Chairwoman of that Board for four years. Kate is currently Chair of the Board of the John Gogian Family Foundation. Debbie Richardson has worked in bank management for over thirty-five years, and is currently Senior Vice President of Corporate Development for Premier Business Bank.  She received the H.E.L.P. Inspiration Award for her longtime leadership and service to the South Bay community.  She is a member of the Torrance, Manhattan Beach, Redondo Beach, and Palos Verdes Peninsula Chambers of Commerce, and served as Board Chair of the latter.  She also served on the Board of Directors of the Palos Verdes Concours d’ Elegance, as well the Palos Verdes Art Center for many years, and is a member of their Patron Circle.  Debbie has received many awards for her community service, including Citizen of the Year for the PV Chamber of Commerce, and the Volunteer Center “Legend in Our Own Time” award.

*Scroll down for photos of the gala.

H.E.L.P. thanks our wonderful sponsors and donors to this event.      They include:

We also thank all of the following businesses who donated wonderful gifts for our silent auction:

With a special thank you to our live auction and raffle donors:

Tom and Sue Cody with Julie and Gary Nelson.